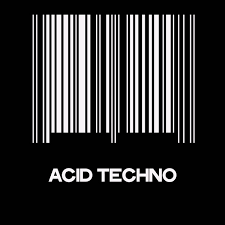 Acid Techno is the type of techno that developed from Chicago acid house and Belgian New beat of the late 1980s.

Acid house was basically classic house, but made with a specific type of instruments, including which highlighted the sound of the Roland TB-303 bass synthesizer .

The word acid specifically refers to the sound of the TB-303 or any other emulator that reproduces a similar sound.

Acid techno is created in a similar way to acid house, but they differ in that the latter maintains the house structure including vocals and organic instrumentation, while acid techno is more focused on rhythm and texture, sometimes lacks melody and tends to be harder.

The term “acid” comes from the album “Acid Tracks” by the group Phuture published in Chicago in 1987. 2

Acid techno developed in the US and Europe in the early 1990s, and although it was dance music, it had nothing to do with other disco -derived styles such as house music.

One of the first acid techno records was Circuit Breaker: Experiments in Sound , produced by Richie Hawtin on the Plus 8 sub- label Probe Records . In the UK , acid techno became very popular on the free party scene .

More recently in the UK, acid techno has developed in such a way that it has broadened its spectrum to encompass a type of sound that is more than just “techno with TR-303”. Labels like Infected, Hydraulix , Cluster , 4×4 , RAW and Powertools reflect this style.

Around the same time as the US and UK, acid techno records began to be released in the rest of Europe. In the Netherlands, Djax-Up-Beats produced both North American and European material from musicians such as Acid Junkies . Germany also had a strong scene, with artists like Mike Ink , Microesfera and Jammin Unit , on labels like Force Inc and DJ.Ungle Fever .

Acid techno has always been, and continues to be, a typically underground sound.